Load Securement on the evening news. Not a good look for the industry. 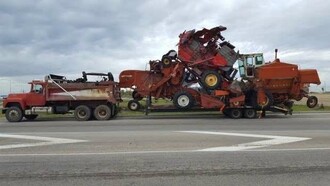 This was on the news last night

In the news yesterday, a driver was stopped with an insecure load.  This made the social media rounds and ended up on the local evening news in Edmonton.  This kind of exposure is bad for the industry.

At first, it is easy to laugh at this and ask the question how could they do that?  The deeper issue is education.  Did this Driver even know what he was doing?  How do these gaps continue to plague an industry that has done so much in the 10 years to improve educational base.

A regulated industry that does little to train those regulations will always be a liability.  MELT is a step CTSP is a step, but there are so many drivers that simply don't know they fall under all aspects of the Traffic Safety Act when they turn onto a roadway.

This story ends well with the driver being fined. The fines were estimated between $2000.00 and $5000.00.  So this driver learns by the whip, like so many others before.  The fact that this is what passes for training is the lingering failure that we need to be concerned about.

The hearsay part of story became worse as bridge strikes were mentioned.  Damage to public property. Exposure of the travelling public to the hazard of this load.  The time and effort to investigate all of this. The fines, though significant, won't start to cover it.